HER: There’s been a lot of talk lately about ‘The Quantified Life.’ I’ve heard a radio show and a TED talk about it just this week. There are apps to track your steps, caloric intake, sleep patterns, running, good deeds … and your sex life!

We actually tried the Spreadsheets app (get it?) last year. It claims to be the #1 sex app in the world and to make sexual data collection “lighthearted and improvement oriented”. It senses your movements, sounds, and records your times. You have to place the phone on the bed with you, so it’s a little like having an audience, which we thought would be sexy. We test drove it for about a week and decided it was too much of a distraction to remember to start it when actual sex began (foreplay doesn’t seem to count). On top of that, the movements often didn’t register, despite keeping it right next to us. Maybe we need to be more bouncy?

Ultimately, we deleted the app, but the idea of tracking our sex life isn’t exactly new to us. You’ve actually been keeping a spreadsheet since we moved in together more than three years ago. At first I thought it was a little strange, but for people like us who are competitive and achievement oriented, it’s a fun way to monitor our ‘progress’ and encourage us to just do it on those nights when sleep is almost as appealing as sex. And, as people who struggled with sexual compatibility in our previous relationships, it’s encouraging to see the quantitative data that proves we’re well matched in our appetites.

HIM: I actually started keeping a primitive version of the spreadsheet in my previous marriage. It seemed like my ex-wife and I were not having very much sex, but I didn’t really know for sure. In fairness, I knew that I could be as biased as anyone and needed an objective picture of what was (or wasn’t) happening. It’s crazy how far apart people’s estimates can be about an activity they are both taking part in. That’s the paradox familiar to every marriage counselor: ask an unhappy couple how often they make love and the high-libido partner will say ‘almost never’ while the low-libido partner says ‘almost every night’. I knew the only way to cut through the subjectivity was to keep some kind of a record. So for a period of several months I kept count, and, sure enough, it was as I expected: with no particular pattern, my first wife and I had sex an average of twice a month pretty consistently.

HER: Yikes. Alright, so how are our numbers so far?

HIM: Well, we started keeping track in November 2012. Below, you can see next to each month the total number of times we had sex. This is just a summary – I actually make a detailed entry for each day. I only count the sex if we change positions a few times (i.e. just sticking it in for a few thrusts doesn’t count). As you would expect, our numbers have fallen off a bit after the first year, but we’re still averaging close to 5 times a week. I’m a numbers guy, so it’s interesting for me to see what I might not have guessed on my own: I’m having sex more than 10 times as often as I did in my previous marriage. Holy Lord!No wonder I’m happy! 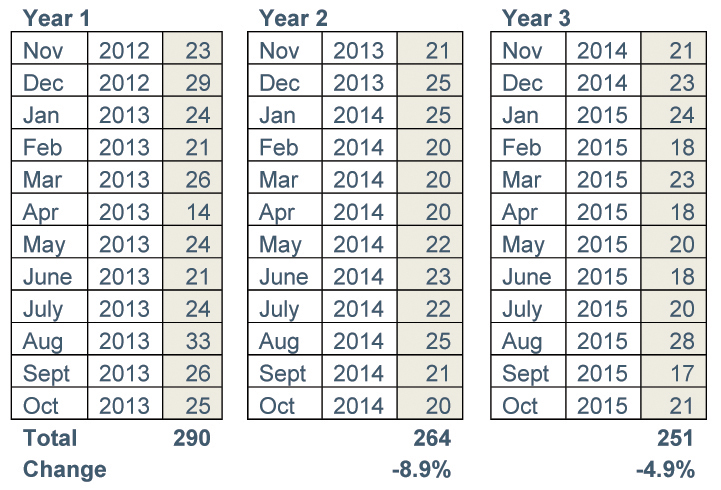 HER: And I’m a words girl, so I love to read the little anecdotal comments that accompany the numbers on the spreadsheet: it’s like a photo album without the visual trauma if your kids find it. We relish those walks down our sexual memory lane, and there are lots of things I would have forgotten if not for your excellent record keeping. Here are some choice excerpts from the first year:

Mar. 5, 2013 – had sex before basketball while the kids played downstairs. tied her up and used riding crop. she came twice.

Aug. 19, 2013 (on vacation at Hedonism II in Jamaica) – had some sex in the pool, then more back in our room. went for lunch, then long session in room (skipped tantric seminar). more sex later after she made out with a beautiful girl at the piano bar.

HIM: Wow. I don’t often do it, but it’s interesting to look back at these experiences. So much would have been lost if it wasn’t written down. It has become addictive to me now to have a thorough, accurate record of our sex life. The scenes are familiar, because we lived them, but there’s also a strange distance that comes from reading about yourself as a character in a story. It makes me wonder, did we actually do all that stuff? It’s one of those situations where the truth really does seem stranger (and hotter) than fiction.

Can’t get enough numbers? Check out this GQ article Sex by the Numbers: What Statistics Can Tell Us About Sex