HIM: Six weeks after our disastrous first experience with another man, we got a text from Derek saying he had some ideas about how we could do things differently if we wanted to try again. I met him for lunch to discuss them, and he suggested that we take some pictures of you as an ice-breaker. In addition to being a doctor, Derek is a pretty talented photographer. I liked the idea immediately. We could start with some traditional portraits and then you could gradually lose your clothes. You’re definitely not shy in front of the camera, and I have an artistic side, so it seemed to play to everyone’s strengths. Rather than starting from a standstill we could allow the sex to develop more naturally.

HER:   I was hesitant about trying again.  In fact, I did something I rarely do: I said no to you.  I had no desire to cause more of the pain you experienced last time. But you were pretty insistent.  I began to feel a little uncomfortable.  You were pushing too hard to make it happen, and my ‘no’ wasn’t being heard.  To be fair, I knew that if I had refused for my own reasons, you would have respected that, but it was because I was refusing on your behalf that you pushed.  You needed to prove something to yourself and I was an obstacle.  Eventually, though, I decided that you deserved the opportunity to redeem yourself, if that’s what you really wanted. 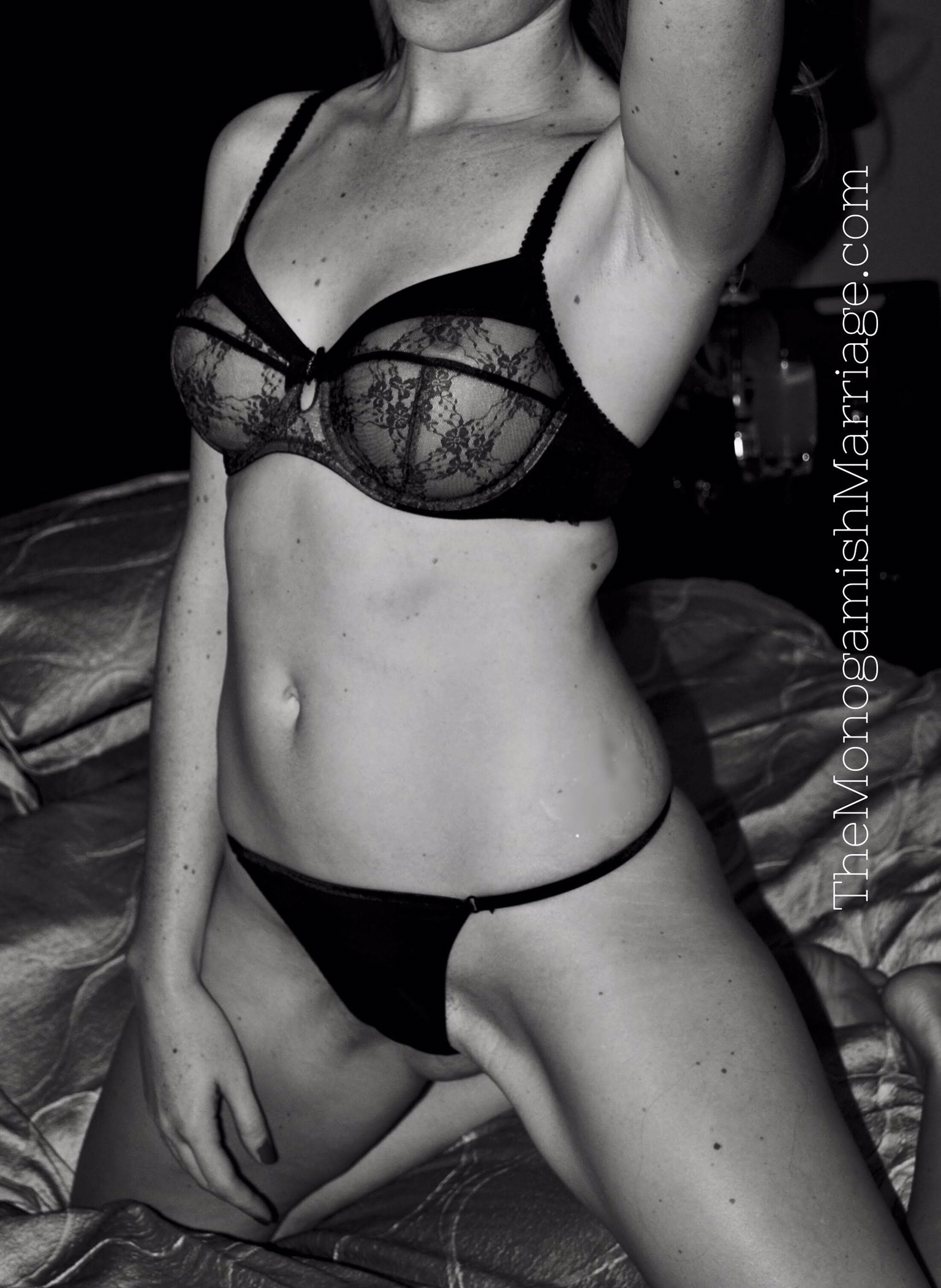 Derek suggested that he go downstairs and get some more wine while we got started without an audience. We could call him up when you felt ready.  That proved to be the magic formula.  You were already turned on from the photography session and quickly got rock hard.  Derek rejoined us in a few minutes and the night progressed as well as any of us could have hoped.  I got fucked by two hard cocks, everyone came, and, after he left, we woke up in the middle of the night and did it again.  It was the beginning of what has now been two years of threesome success.

HIM: It’s so interesting – I was initially attracted to the idea of an MFM threesome after hearing about your cousin’s crazy experience, but I really had no idea what was in store. There was nothing logical about my desire to see you have sex with another man. I remember thinking at first that we should have some ground rules, like maybe you shouldn’t kiss him (somehow kissing seemed more intimate to me than fucking). But in the end we just decided to let things proceed in whatever way felt right to you. I love watching you spread your legs for him, and seeing the subtle ways your body registers his cock pushing into you for the first time. But I have to say that I also love the off-handedly tender gestures, like when you gently stroke his chest or whisper encouragements. These days, the more pleasure you appear to be taking in Derek’s body, the more excited I feel. But it goes beyond that: somehow your enjoyment of this other man actually makes me feel closer to you. Everything about our threesomes seems generous-spirited, non-competitive and even spiritual.

HER: I generally resist hippy statements like that, but I’d agree.  I recently read an article by Christopher Fernandes, who’s studied swingers for 15 years. He reported, “A colleague once commented that ‘swinging wives’ are to be pitied since they have to ‘endure’ these unrealistic demands from overbearing and oversexed husbands, and they should be viewed as victims of this male-dominated lifestyle” (Women, Swinging, and Seduction).   His research, instead, supports just the opposite. He claims, for many women, swinging “becomes an emboldening opportunity to explore aspects of themselves that society has otherwise tried to control.” That’s been my experience, too. I feel the opposite of victimized. In every encounter, I am treated like a sexual goddess, and I get to be as aggressive or submissive as I like.

At the beginning, my people-pleasing side came out.  I was worried about entertaining each of you.  You’d each take turns with me, and I took pains to give you both equal time.  If one of you got a blowjob, I had to make sure the other got the same treatment.  But now that everyone is more comfortable, I love just lying back and letting you both please me.  I think the best part is closing my eyes and feeling hands, mouths, and cocks all over me.  I can allow myself to be a little selfish knowing that nobody’s keeping score.

The pleasure isn’t all sexual, either.  I also love the moments afterward when we’re all spent and sweaty, lying in bed, laughing and touching. I feel safe, respected, and adored.  I know that both men in the room truly care about my well-being.  But, at the end of the evening, all that healthy mutual affection is not a threat to our relationship.  I care for Derek – we both do — but I love you.  Like crazy.

HIM: I would never suggest that other people should do exactly what we’ve done, that the same formula would work for everyone. We had threesomes with Derek six times in that first year and each time was better than the last. For me, personally, I think there have been two crucial factors. First of all, we found the right person. Derek is very sexual, but he’s also polite and considerate. He’s committed to the primacy of our relationship and works hard to avoid any word or gesture that might seem threatening.

Most importantly, however, it all works for me because of who you are. Our relationship is strong and multi-dimensional. You are my partner and best friend in all aspects of life, and you have done a great job of making me feel like the right man for you in every way. At the same time, you have the ability to abandon yourself in the moment with someone else honestly and unselfconsciously. So many of the things you’ve said and done in that state have burned themselves into my memory. This is, for me, the amazing thing about us having a threesome with another man – I get to see facets of you that would not have been visible in any other context. I get to know you better than I could have otherwise and, in the end, that’s what makes these experiences irreplaceable.