HIM: We recently watched the movie ‘Weiner’, a documentary directed by Josh Kriegman and Elyse Steinberg. You probably remember the story of Anthony Weiner, the New York state congressman who fell from grace in 2011 after sexting a picture of his bulging underwear to a woman who was not his wife. Two years after that fiasco, he decided to stage a comeback by running for Mayor of New York City, and that’s where the documentary picks up the story. We see him leading in the polls when more women come forward with still more explicit photos, many of them sent by Weiner after he promised voters he had changed his ways. His campaign implodes before our eyes.

But it didn’t end there. After watching the story of how much pain and suffering he brought on himself and his wife, we were curious about what had become of Anthony Weiner. We did a quick search online and the results were not pretty.  Even as the movie was being finalized for release, his own lawyers revealed that he had explicit conversations with 19 different women in the first three months of 2016 alone. There was yet another individual, however, and she was not a woman: she was a 15 year old girl, and Anthony Weiner is now serving 21 months in prison for knowingly “transferring obscene material to a minor”.

HER: To say that his sexting was out of control would be an understatement. It was clearly so powerful that he was willing to put his career, reputation, and marriage on the line to get a fix that, as far as anyone knows, never even led to meeting these women. I don’t get it. But Weiner isn’t the only one. Dick pics are so common, it’s become a running joke. And, let me tell you, as the representative woman in the room, a picture of a disembodied cock does absolutely nothing for me. So you would think that women, as the receiver of these strange ritual mating displays, would avoid embarrassing themselves in the same way. But now it seems the trend has extended to women. The New York Times recently published The Selfie that Dares to Go There about the increasing instances of women sending selfies of their vaginas. While I can’t imagine doing this, Twitter is rife with such images, and I know you’d love to get one from me. So, help me understand. What would excite you about getting a close up picture of my privates?

HER: That’s interesting, but it doesn’t really answer my question. Why would you even want a close-up of my vajayjay in the first place? Why is that part of your love language?

HIM: I think it’s because it’s so forbidden. If a woman does something that is clearly against society’s rules, she’s saying that you’re special in a powerful way. She’s expressing her vulnerability. Also, that’s where our cocks go during sexual intercourse, and many peer-reviewed studies have shown that sexual intercourse feels wonderful. 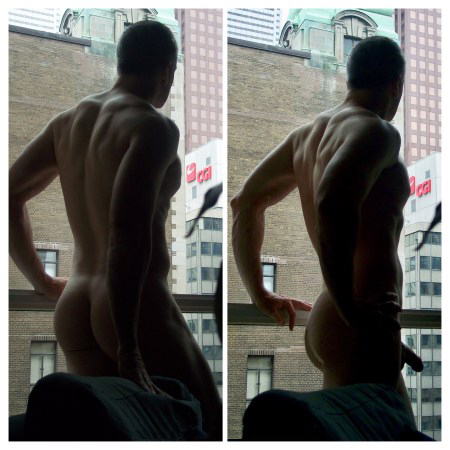 HIM: Well, before you go acting all innocent here, sending sexually charged images over the internet is not totally foreign to you. In fact, it played an important role in our courtship. Do you remember what you did after our second date?

HER: I went to my best friend’s house and told her I had just met ‘the one.’

HER: Oh right! I was so turned on, I started making out with her and sending you pictures.

HER: I guess I wanted to make sure I got your attention. Oh, I just had an epiphany! These vagina selfies aren’t about vaginas. They are an in-your-face way for girls to seal the deal by showing just how risqué and exciting they can be. They don’t want the guy to get away. It’s like having the shiniest lure when you’re fishing in a big pond.

HIM: That makes a lot of sense. And that’s definitely a case of speaking a man’s love language. But I really like how you did it. While sending me a shot of your pussy would have qualified as an attention-getter, that video was like a thermonuclear explosion. First of all, you were having sex with your friend. Your friend! Who does that? Answer: the kind of girl I’m immediately interested in marrying. Second, I got to see your playful sexuality in real time. You were smiling all the way through, which is so like you (many of our play partners have commented on that over the years). And at one point you surprised her by spanking her pussy, and then laughing at her when she looked shocked. Any woman can say ‘I love sex’, but you showed me in an undeniable way that it’s an important part of who you are. 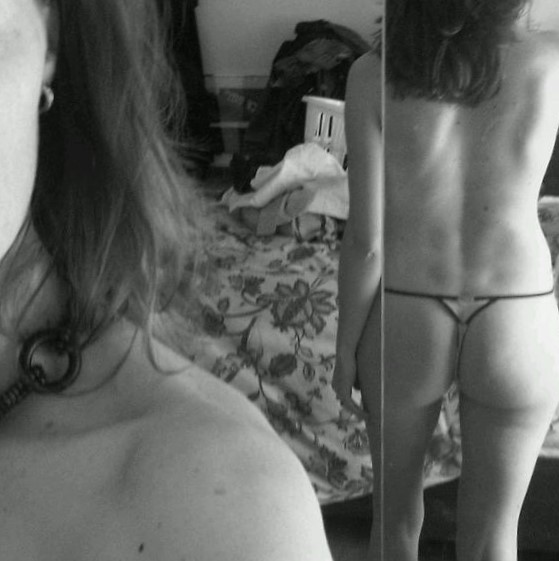 HER: And that’s what’s missing from the classic dick pic! Take note, men: women want to get a three-dimensional sense of the whole man, not just his member, even if it’s just for no-strings-attached sex. Here’s an example. You never sent me a video, but you did send these pictures to me very early in our relationship. They were so sexy I actually masturbated to them. I even showed my sister. But the reason they worked was because there was artistry. There was subtlety and intelligence at work. They revealed something about you. Besides, if you just sent a cock shot, I would have missed out on that amazing body!

HIM: I know that’s not just an abstract principle for you because you did the exact same thing for me. One day you sent me a bunch of black and whites that included this gem. And just in case you can’t guess why I liked it so much, it was … the laundry. Show me a sexy woman with a killer ass and domestic responsibilities and I’m defenseless.

HER: I wish I could say the same for me. Do you remember that guy that sent me a picture of himself chopping wood with an axe wearing nothing but his work boots? What was his name, Tony? He clearly took his domestic responsibilities seriously, but that picture just made me laugh. And not in a good way.

HER: Now that we’ve long since sealed the deal, and embarked on our lifestyle adventure together, our sexting days aren’t over. We’ve had a lot of fun sending shots to other couples. Looking back through the archives for this article, I found a picture we took last month on a road trip. We were talking about friends of ours we hadn’t seen in a while and decided to send them a reminder of how excited they made us.

HIM: You later posted it on Twitter and it turned into our most retweeted post ever. By the way, if any of you readers don’t follow our Twitter feed yet, @monogamish1, you definitely should. ‘Her’ runs that show, and it’s super hot. 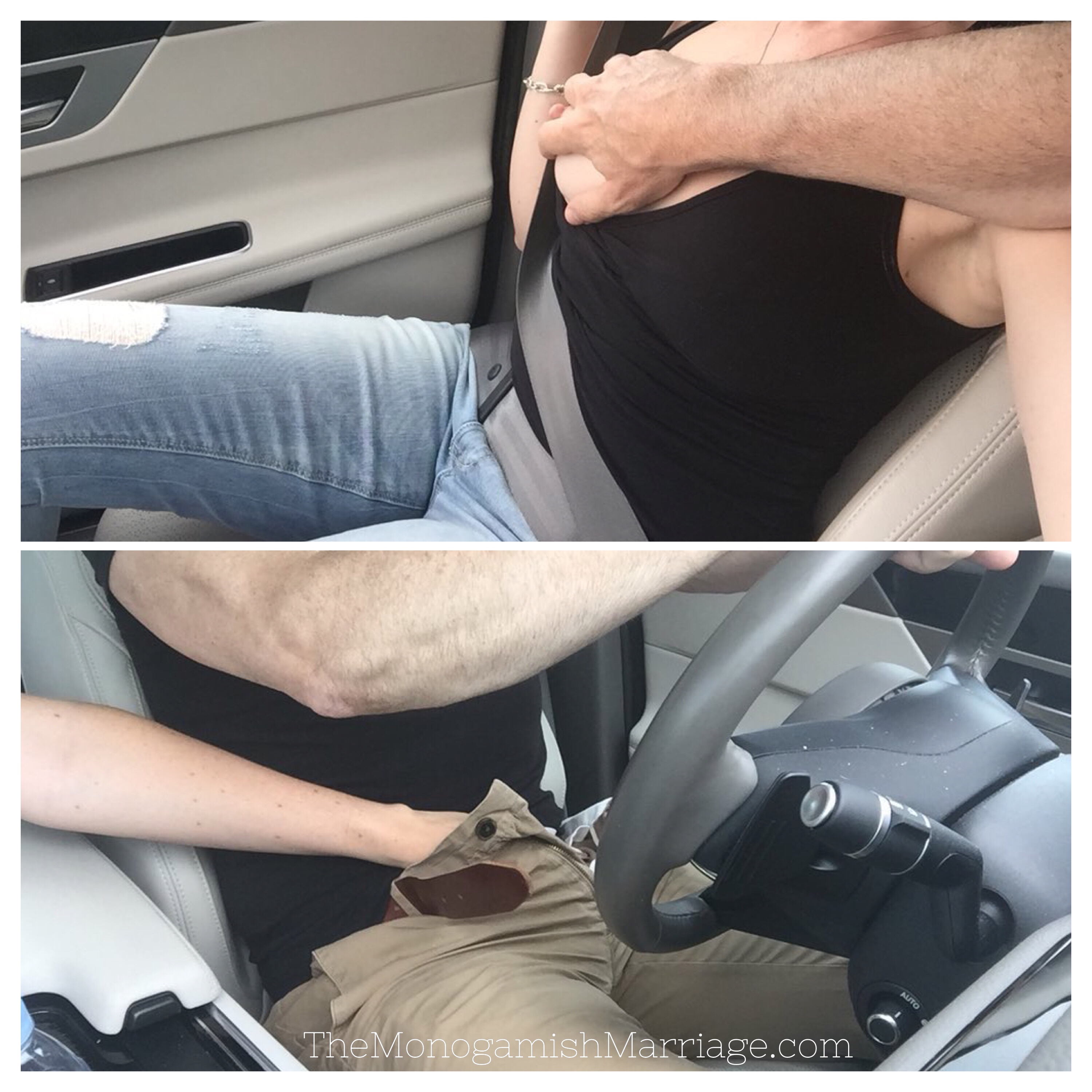 HER: I’ve put up lots of partial nudity, and occasionally some full nudity, but apparently people really like the action shots with more suggestion than revelation.

HER: Which actually brings up another important point: risk is a big part of the thrill of sending naked pictures, just as it’s an essential part of the lifestyle. The risk of being caught is real, as is the risk of STIs. Every time you see a swinging couple engaged in unprotected oral sex (which is basically all the time), those two individuals are saying that they are accepting a certain amount of risk in exchange for a certain amount of reward. And that’s the real appeal of sexting. It’s a little bit dangerous. Regardless of how much you trust the person on the receiving end, no one can guarantee that your picture won’t somehow find its way out to the wider web. I’m sure that was a big part of the appeal for Anthony Weiner. The reality that he had so much to lose didn’t scare him. In fact, it’s probably what made his whole crazy sexting adventure so irresistable for him.

HIM: You’re right. Now that I think of it, he even broadcast that fact with his pseudonym. Do you remember what it was?

HER: Carlos Danger. Not attractive.